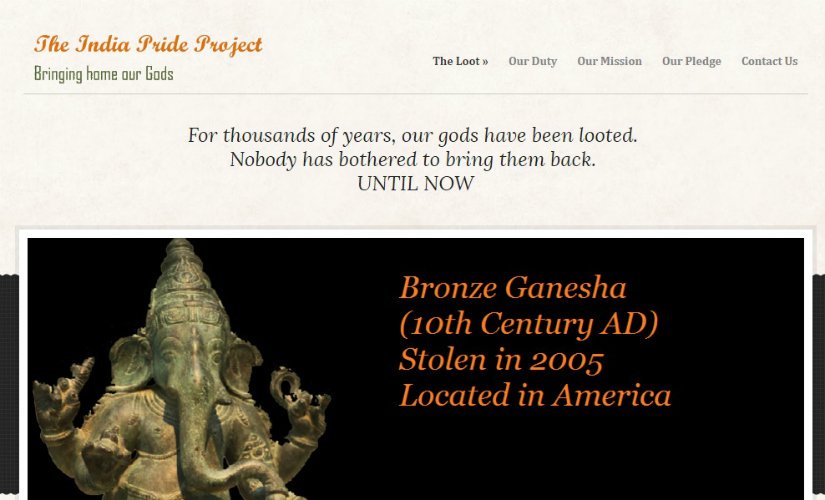 During the course of discussion, IPP was asked: Take the example of Kohinoor, what can the IPP really do and don’t you think you need the government to take further steps?

Two things to your question. I will just put things in context.

One dealer who was operating in New York, his standing stock of known places of where he was holding artefacts yielded 2655 objects valued at 108 million dollars. Just the standing stock! That is the kind of Loot that is outside of India, currently working in the market. We are not even talking about colonial India. It’s the last 10-12 years, wherein free India has lost its stock. So I will leave Kohinoor for a different forum. And only person who can bring back is government.

And please don’t call these as gifts. These are not gifts. Somebody robs you of your wallet, you will go after him and whack the shit out of him and take your wallet back. And the same thing is happening at a glorified platform. So, the government is the only person. Yes, public pressure and social media does help. Whatever little that has come back has come has come back because of media people. Like in Australia, it was on the front page. Michaela Boland, is our friend and savior, in Australia, works for an Australian paper and she ensured prompt follow up and It was on their face and we can embarrass them to bring back a few.

When we take pride in a few it creates a deterrent. The deterrent is what we can achieve as individuals . No museum in Australia for the next one generation at least, is going to touch an Indian object with even a shady provenance.

That to us is a small success. But the larger success will only happen if we can mobilize government support.

I would add one bit to the Kohinoor angle. I know I am going to lose female half of the audience. I have this over and over again. Why are we so excited and running behind an ornament. An ornament no matter how awesome it might look is still an ornament. Here we are talking of objects with which people have a connect. An object of faith!

It is unfortunate the way we look at it. That an ornamental object has more value than my kula devi or kula devata which has gotten lost.

You are absolutely right. The last leg. No matter whatever we do. The last mile job can only be done by government. This is national treasure and only government can demand it back. No private company can really do it. Our effort is that the ones who can demand it which is the Ministry of Culture, Government of India, demands and brings our Gods back.

Discrimination against Hindu institutions by executive and judiciary

Bringing back our stolen sculptures - a talk by Anuraag Saxena

Narrative of the “Islamic Golden Age”, “Islamic Mathematics” or “Arabic Mathematicians” is just myth and propaganda

Author मुखरनीना 0 342
Courtesy: https://twitter.com/bharadwajagain/status/1574254649536049152?s=48&t=JlEG6Pl-Dssb8gpSKupN-g It is shocking to note that the Nizam imported Muslims to create population supremacy in the region. A large settlement of Yemeni...
Read More

Dattatreya Parvatikar: The Musician as a Mystic (Excerpt)