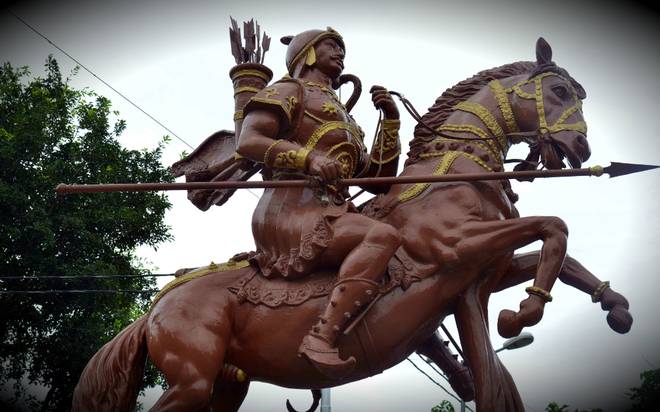 Sanjeev Sanyal in his talk at the Press Club of India, organized by the Srijan Foundation begins sharing some lesser known instances from Indian History.

So let me name a few battles through history that many of you may have never heard of but are actually major events in Indian history. Now, you have all heard of Mahmoud Ghazni and how he invaded India for 17 times over 25 years. So, if you read an Indian history book you will get the impression that Mahmoud Ghazni came, he invaded 17 times, few years passed and then Mohammad Ghori came in and defeated Prithvi Raj Chauhan and the gates of India opened and we were conquered in one shot.

In fact nothing of that sort happened. There is a gap of one and half centuries between Mahmoud Ghazni and Muhammad Ghori. And why is there a 150 year gap between the two and the reason for that is that in 1033 A.D. a very large Turkish army charged down from Afghanistan across the plains, across into the Gangetic plains and was met by much smaller army led by bunch of local chieftains from that area; near what is now Faizabad and Ayodhaya area. They fought a big battle and the Indian side was led by a chieftain called Suheldev Vasudev Passi; and in that battle the Turks were completely destroyed. They were destroyed and decimated to such an extent that they didn’t dare to come back in for next 150 years. This army was led by Mahmoud Ghazni’s nephew. He was killed in the battle. There is still a mazaar to him in Bahraich. It is the battle of Bahraich in 1033 A.D.

Now, no Indian textbook will tell you about this. The only people who remember about this are the castes from which Suheldev Passi came from, the Passis themselves. But Other than that no one pretty much remembers this. But this is not the only example.

P.S.-The topic of discussion was ‘How much of Indian history is really true’.

Did you know: Martanda Varma of Kerala defeated the Dutch - the most powerful navy of the time

Goa Inquisition: Lest We Forget – A Talk by Shefali Vaidya

UKRAINE AND RUSSIA PUSHED TO CONFLAGRATION

The myth of Buddhist Persecution