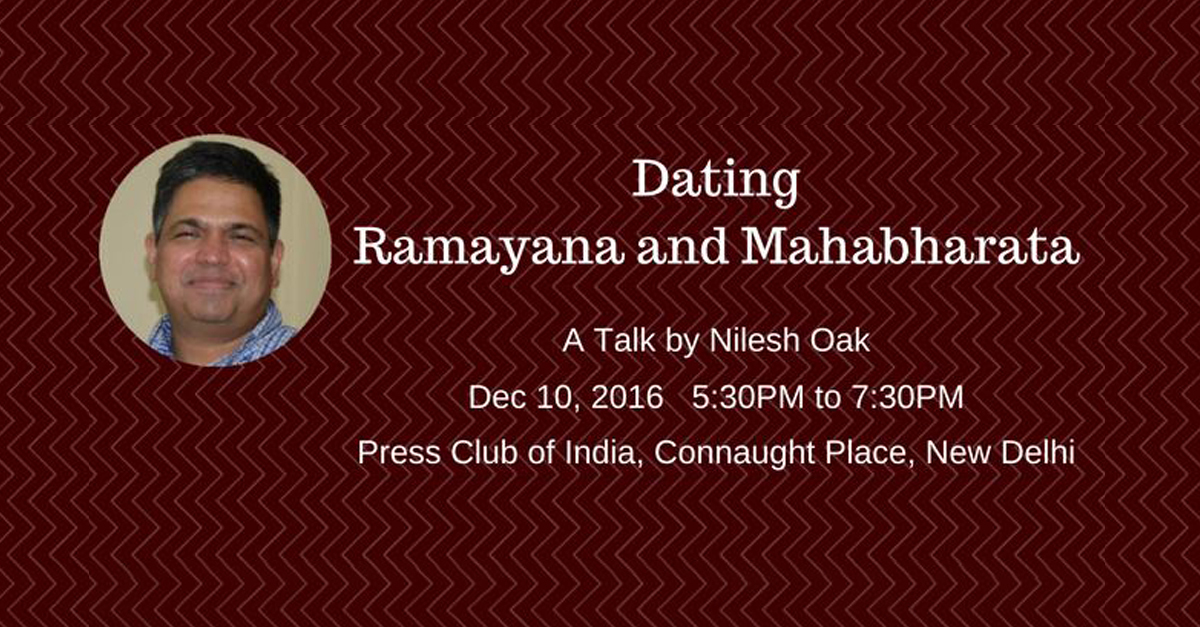 In a series of articles, we will be unfolding Nilesh Oaks’ opinions and arguments on the date of Mahabharata and Ramayana. The author has used the talk delivered by Nilesh Oak at the Press Club of India which was organized by the Srijan Foundation as subject material along with other sources. The topic of the talk was Dating of Mahabharata and Ramayana.

To begin with, let’s see what can be different ways to date the Mahabharata and Ramayana. Nilesh dates the two events using Astronomical evidence. But that’s not the only way. If one wants to find out the timing of the Mahabharata and Ramayana on need not necessarily stick to astronomy. One can take the geology route, or archaeology route or any other.

Why bother dating Mahabharata and Ramayana?

Enormous evidence exists when it comes to Indian history. A number of us have heard this. A number of us might think that this is true, that when it comes to Indian history we don’t have enough evidence. But it is important to understand that there is a ton of evidence. A lot of evidence that people even don’t know it exists. You, me and scholars don’t know it exists and we don’t know what to do with it and how to interpret it.

As Nilesh points out, British did a very successful thing in deracinating generations of Indians at least three generations of Indians. If one goes around the world and talks to locals one would quickly notice the contrast in opinions of people about their own culture. Nilesh says,”I am an Indian but I haven’t seen a place where people have so much inferiority complex. And I am convinced that it has to do with deracination.”

Other people talk about their epics, talk about their history with great pride. They know it in detail. But in India, it is almost a fashion not to talk about it. If you do, you might be considered backward or something like that. That is the kind of idea and mindset that has developed.

Scientific discoveries and a falsifying evidence

Did You Know History Independence Movement May 04, 2018

Breaking a myth – Muslims ruled all of India for 1000 years