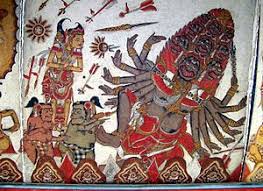 Then, the next evidence that we have in art is from the second, third century A.D. It is a seal from Kashmir’s Smast and it has in Brahmi, Ram – Siya written on it. And the most interesting is a small terracotta piece that is now in a museum in America. It shows Ram with a quiver full of arrows at his back and on his skirt the word Ram is written.

So, these are three earlier depictions of scenes from the Ramayana which tell us that it was quite widely known very early in our history.

Educational Heritage of Ancient India — A Talk by Sahana Singh