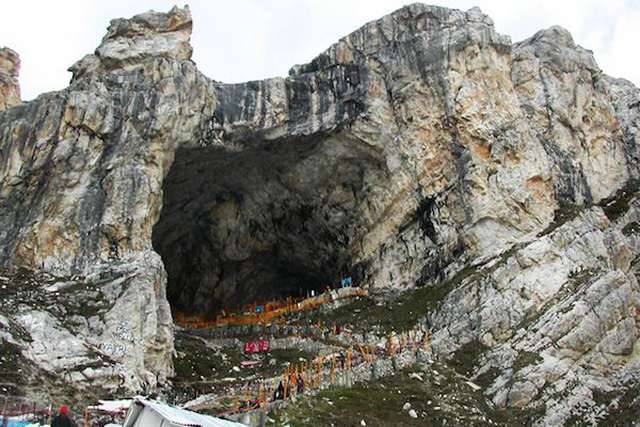 This is the third part in a four-part series about the important contributions of Kashmir to Indian culture.

Kashmir has made a unique imprint on the Hindu religion with its contributions of Shaivism, Vaishnavism and Tantric Shaiva traditions. Also an early centre of Buddhist scholarship, Kashmiris were tireless in the spread of Buddhist ideas to Asia.

The Kashmiri approach to the world is uniquely positive. There is a celebration of nature and beauty for the objective world which is also a representation of Brahman (Lord). This approach is part of the Kashmiri tantric thought in both its strands of Shaivism and Vaishnavism. The Tantras stress the equivalence of the universe and the body and look for divinity within the person.

Although the Vaishnavite Pancharatra now survives only in South India, the earliest teachers looked to Kashmir as the seat of learning and spiritual culture. The Pancharatra ontology and rituals are described in the Kashmirian Vishnudharmottara Purana. According to this theology, the king was enjoined to build a temple for the rites to be performed to celebrate his victory over his opponents. These rites marked his union with Vishnu. This represented an important milestone in the conceptualisation of the role of the king in Indic thought.

According to Kalhana, the worship of Shiva in Kashmir dates prior to the Mauryan King Ashoka. The Tantras were enshrined in texts known as the Agamas, most of which are now lost. The pinnacle of the Tantric Shaiva tradition is the “Trika system”. The great spiritual master and scholar Abhinavagupta (c. 975-1025) describes the goal of the Shaiva discipline is to find freedom. In this freedom, the adept becomes one with Shiva, transcending all oppositions and polarities. The jivanamuka (the liberated person) experiences the freedom of Shiva in a blissful and unitary vision of the all-pervasiveness of the Absolute.

Two very interesting ideas in Kashmir Shaivism are that of recognition and of vibration. In the philosophy of Recognition, it is proposed that the ultimate experience of enlightenment consists of a profound and irreversible recognition that one’s own true identity is Shiva himself. The doctrine of Vibration speaks of the importance of experiencing spanda— the vibration or pulse of consciousness. Every activity in the universe, as well as sensations, cognitions and emotions, ebbs and flows as part of the universal rhythm of the one reality, Shiva.

Kashmir became an early centre of Buddhist scholarship. In the first century, the Kushan emperor Kanishka chose Kashmir as the venue of a major Buddhist Council comprising of over 500 monks and scholars. At this meeting, the previously uncodified portions of Buddha’s discourses and the theoretical portions of the canon were codified. The entire canon (the Tripitaka) was inscribed on copper plates and deposited in a stupa. The Buddhist schools of Sarvastivada, Mahayana, Madhyamika, and Yogachara were all well-developed in Kashmir. It also produced famous Buddhist logicians such as Dinnaga, Dharmakirti, Vinitadeva and Dharmottara.

Kashmiris were tireless in the spread of Buddhist ideas to Central Asia. Attracted by Kashmir’s reputation as a great centre of scholarship, many Buddhists came from distant lands to learn Sanskrit and train as translators and teachers. Amongst these was Kumarajiva (344-413 AD), the son of the Kuchean princess who, when his mother became a nun, followed her into monastic life at the age of seven. He came to Kashmir in his youth to learn the Mahayana scriptures from Bandhudatta. Later, he became a specialist in Madhyamika philosophy.

In 383 AD, Chinese forces seized Kucha and carried Kumarajiva off to China. From 401 AD, he was at the Ch’in court in the capital Chang’an (the modern Xian), where he taught and translated Buddhist scriptures into Chinese. More than 100 translations are attributed to him. His works include some of the most important titles in the Chinese Buddhist canon. Kumarajiva’s career had an epoch-making influence on Chinese Buddhist thought, not only because he translated important texts that were previously unknown, but also because he did much to clarify Buddhist terminology and philosophical concepts. He and his disciples established the Chinese branch of the Madhyamika, known as the San-lun, or “Three Treatises school”.

Many famous Buddhist Tantric teachers were associated with Kashmir. According to some Tibetan sources, Naropa and Padmasambhava (who introduced Tantric Buddhism into Tibet) were Kashmiris. The Tibetan script is derived from the Kashmiri Sharada script. It was brought into Tibet by Thonmi-Sambhota, who was sent to Kashmir during the reign of Duralabhavardhana (seventh century) to study with Devatitasimha.

This essay has been taken from Kashmir and its People: Studies in the Evolution of Kashmiri Society. M.K. Kaw (ed.), A.P.H., New Delhi, 2004.

Legacy Of Kashmir, The Forgotten Land Of Beauty And Knowledge — Part I

Legacy Of Kashmir, The Forgotten Land Of Beauty And Knowledge — Part II

The Concept Of The Universe As Understood By Ancient Indian Seers

Was Aristotle’s Claim Of Indian Origin Of Jews True?

The Division Of Sanskrit Versus Dravidian | Raj Vedam