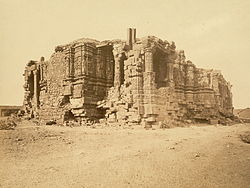 Now this is Richard Eaton who says this. He is an American self-described communist academic and he claims that, Hindus on a massive scale destroyed temples that this was their want. In reality, he cannot manage to find more than a few cases of Hindus not demolishing temples, but abducting idols. In some cases an idol was a prestigious thing, it was a work of art and so on. And so rulers wanted to have it and so there was a war. The clinching moment at the end, was the abduction of an idol, which was then installed in the main temple of that conqueror and the temple where the idol was just left free, and of course, the loser in the war could always install a new idol there and continue the same worship.

So, that is something totally different from the iconoclasm of the Eskimos, which meant to humiliate and ultimately to destroy the religion of the loser and so destroying his places of worship was not at all meant to bring over the idol or place of worship to the wrong side and continue the worship, at least I have never heard of this. That you know the eskimos destroyed the Somnath temple and they took the Shiva Lingam to one eskimo place of worship, and they’re continuing the worship of Shiva. I don’t know, you can maybe find some strange eskimo place of worship, where they do worship an idol. But so far, I think by definition that will not happen. So, we have a large moment of denial or whitewash of iconoclasm in India, that means largely the heavy minimization of iconoclasm. In the great days of the Ayodhya controversy, many secularistic stories went as far as to deny iconoclasm altogether, that far very few people would dare to go.

So, the usual story now is to minimize it, yeah okay it may have happened a few times, first of all the Hindus have brought it on themselves and anyway it wasn’t so much, although you should see what is not so much. Like for instance, Eaton admits a single case of iconoclasm when the troops of Mohammed Ghori or his lieutenants conquered Varanasi in 1194. Now, then you should go to the footnotes, this is one case of iconoclasm, yes. But he himself admits that a thousand temples were destroyed and so basing themselves on his figures, Indian secularists now raise this claim that, about 80 cases of temple destruction has taken place in India during thousand, a thousand years in the whole of India. So, 80 in this case doesn’t really mean 80 because one can mean 1000. One case of iconoclasm means 1000 temples and even then, it is much too low a figure. In Gilgit and Baltistan, which is a very thinly populated region already more than 80 temples got destroyed in a decade. So for the whole of India and a thousand years, it will be more than that.

The Connection Between Vivekananda, Tesla, And The Akashic Field

Do you know who has discovered “Mount Everest”? Meet Shri Radhanath Sikdar