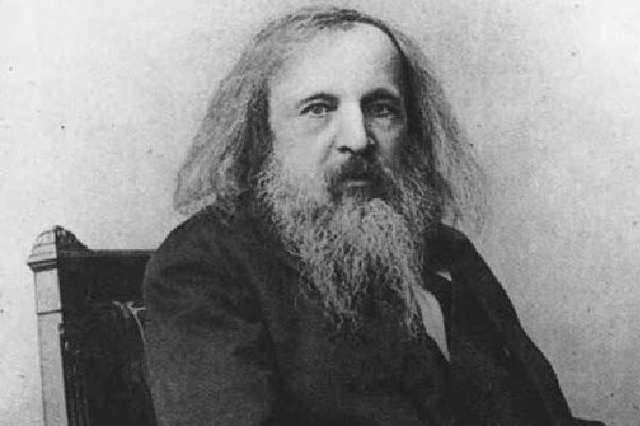 How the two-dimensional structure of Sanskrit could have led to the creation of the periodic table.

It is an amusing fact that the original names used by Mendeleev for gallium and germanium are eka-aluminum and eka-silicon, where the eka, Sanskrit for one, has the sense of beyond. The prediction for the existence of these elements was made by Mendeleev in a paper in 1869, and it was the identification of these elements in 1875 and 1886 that made him famous, and led to the general acceptance of the periodic table. In all, Mendeleev gave Sanskrit names to eight elements in his periodic table. Here we speak of how the two-dimensional structure of Sanskrit led him to his momentous discovery.

Mendeleev was born at Tobolsk, Siberia, and educated in St. Petersburg. He was appointed to a professorship in St. Petersburg 1863 and in 1866 he succeeded to the Chair of Chemistry in the University. He is best known for his work on the periodic table, which was soon recognized since he predicted the existence and properties of new elements and indicated that some accepted atomic weights of the then known elements were in error. His periodic table formulated in 1869 remains one of the major conceptual advancements in the history of science.

Mendeleev arranged in the table the 63 known elements based on atomic weight, which he published in his article “On the Relationship of the Properties of the Elements to their Atomic Weights”. He left space for new elements, and predicted three yet-to-be-discovered elements including eka-silicon and eka-boron.

The earlier attempts at classification had considered some two-dimensional schemes, but they remained arbitrary in their conception. Mendeleev’s main contribution was his insistence that the two-dimensional should be systematic and comprehensive. In this he appears to have been inspired by the systematic arrangement of Sanskrit sounds in the standard akṣara-mālā, which he indirectly acknowledges in his naming scheme.

Julius Lothar Meyer (1830–1895) published his classic paper of 1870 that also presented the periodicity of atomic volume plotted against atomic weight. Meyer and Mendeleev carried on a long drawn-out dispute over priority. But it was Mendeleev’s predictions of yet-unknown elements that secured his fame. The most famous of these predictions was for eka-silicon (germanium) for which not only did he postulate its existence, but also its properties in its chloride and oxide combinations.

The Sanskrit Tradition and Mendeleev’s Discovery

Note that the Sanskrit alphabet is represented traditionally in a two-dimensional arrangement based on how the sounds are produced. See below

Pānini, the author of a famed grammar of Sanskrit who lived in the fifth century BC, in his Śiva Sūtras (also called Māheśvara Sūtras) came up with another classification in 14 categories based on phonological properties of sounds. See below:

According to Professor Paul Kiparsky of Stanford University, Mendeleev was a friend and colleague of the Sanskritist Böhtlingk, who was preparing the second edition of his book on Panini at about this time, and Mendeleev wished to honor Pānini with his nomenclature. Noting that there are striking similarities between the Periodic Table and the introductory Śiva Sūtras in Panini’s grammar, Kiparsky says:

Like Panini, Mendeleev arrived at his discovery through a search for the “grammar” of the elements (using what he called the principle of isomorphism, and looking for general formulas to generate the possible chemical compounds).

Just as Panini broke the phonetic parallelism of sounds when the simplicity of the system required it, e.g. putting the velar to the right of the labial in the nasal row, so Mendeleev gave priority to isomorphism over atomic weights when they conflicted, e.g. putting beryllium in the magnesium family because it patterns with it even though by atomic weight it seemed to belong with nitrogen and phosphorus. In both cases, the periodicities they discovered would later be explained by a theory of the internal structure of the elements.

Kiparsky has examined the question of the optimality of the Śiva Sutras elsewhere. He suggests that this optimality might have provided him with the confidence in a similarly optimal two-dimensional table of elements. My own view is that it is unlikely that Panini’s Śiva Sutras influenced him, because there is no evidence that he knew Sanskrit well enough to appreciate the subtle points related to the organization of the Śiva Sutras.

It is more plausible that he noted the comprehensiveness of the two-dimensional arrangement of the Sanskrit alphabet (varṇamālā) which is apparent to even the beginning student of the language. The tabular form of the Sanskrit letters is due to the two parameters (point of articulation and aspiration) at the basis of the sounds, and Mendeleev must have recognized that ratios/valency and atomic weight likewise defined a two-dimensional basis for the elements.

Convinced that the analogy was fundamental, Mendeleev theorized that the gaps that lay in his table must correspond to undiscovered elements. For his predicted eight elements, he used the prefixes of eka, dvi, and tri (Sanskrit one, two, three) in their naming.

It should be recognized that some of the most brilliant European minds studied Sanskrit in the nineteenth century, and philology and natural science papers were published in the same proceedings of the St. Petersburg Academy of Sciences, as at other academies. The two-dimensional regular representation of Sanskrit sounds must have been well-known to Mendeleev.

Mendeleev, by using Sanskrit names, was tipping his hat to the Sanskrit grammarians of yore, who had created astonishingly sophisticated theories of language based on their discovery of the two-dimensional patterns in basic sounds. The connections between computer science and Sanskrit grammatical conception have been investigated by several scholars. But the connection between these grammatical ideas and modern theories of matter is a most fascinating chapter of history of science that has remained forgotten for over a hundred and thirty years.

Author मुखरनीना 0 1651
– Ravi Singh Choudhary The fundamental difference between western psychology and yoga is that mind coupled with senses are the only instruments of experiencing...
Read More
Miscellaneous

What is the original name of Hindukush Mountains

James Mill – The author of British Indophobia and hostility to Orientalism in written form.

14 January 1761 — Remember the sacrifice of 100,000 Marathas in Panipat battle, defending the country against Jihadis from Afghanistan