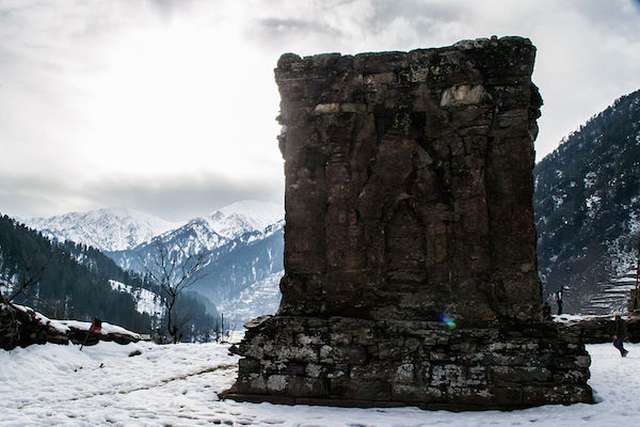 Source:- ‘The Valley of Kashmir’ written by Walter Lawrence.

“Sultan Sikandar came to the throne, and soon earned the nickname of Butshikan or Iconoclast, from the intense zeal he showed in destroying the grand old temples which the Hindu Rajas had bequeathed to Kashmir. Sikandar was brave and cultured, but all his good qualities were warped by his gloomy fanaticism. He attracted learned Musalmans to his court, amongst others Muhamad Khan Hamadani, the successor of the famous Shah Hamadan, who added fuel to the fire of the king’s fierce zeal. Hindu temples were felled to the ground, and for one year a large establishment was m.aintained for the demolition of the grand Martand temples. The massive masonry resisted all efforts, and finally fire ‘ was applied, and the noble buildings were cruelly defaced…..”

“There was a certain method in the mad zeal of Sikandar, for he used the plinths and friezes of the old temples for the embankments of the city and for the foundation of the Jama Masjid. Having glutted his vengeance on Hindu temples, Sikandar turned his attention to the people who had worshiped in them, and he offered them three choices, death, conversion, or exile. Many fled, many were converted, and many were killed, and it is said that this thorough monarch burnt seven maunds of sacred threads of the murdered Brahmans. All books of Hindu learning which he could lay h’s hands on were sunk in the Dal lake, and Sikandar flattered himself that he had extirpated Hinduism from the valley. In this gloomy reign wine, gambling, and music were strictly prohibited, and during Sikandar’s twenty-five years of power Kashmir must have been a dolorous country.””

Kabo valley was LEASED to Burma in 1834. Nehru gave it up WITHOUT Parliament's consent

The source of the word 'God'