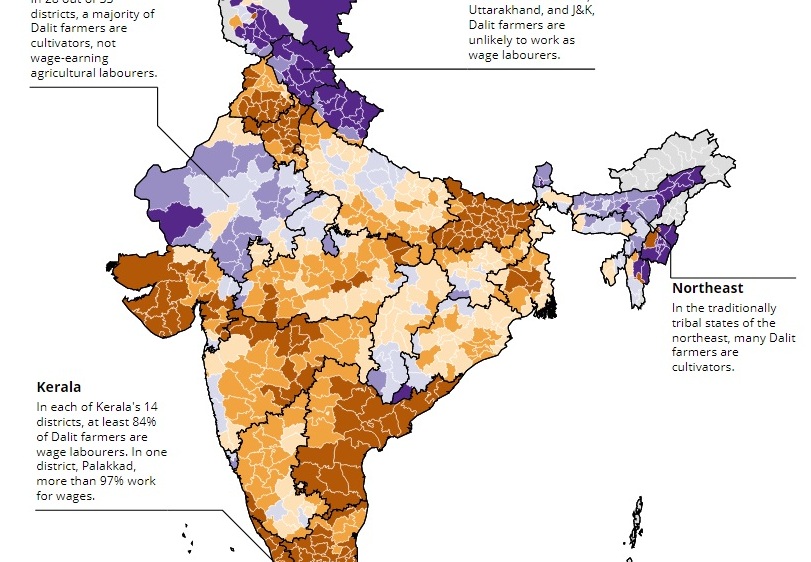 Source: This article is originally published in Hindustan Times.

While a majority of Indian farmers cultivate their own land, Dalit farmers in much of the country continue to work for wages, data released last week by the Census of India confirms.

The census separates farmers into two categories — cultivators, who have an ownership stake in the land, and agricultural labourers, who work for wages on land they do not own.

Dalit farmers are more likely than other farmers to work for wages. Yet the situation is hardly the same everywhere, according to census data from 2011.

In states with larger tribal populations, such as states in the north and northeast, and to a lesser extent in Rajasthan, Chattisgarh, and Jharkhand, Dalit farmers are less likely to work for wages.

“In tribal societies, in general, land has been more equitable than in feudal societies,” said Himanshu, a professor at the Centre for Economic Studies and Planning at Jawarharlal Nehru University in Delhi.

Economists say concessions to farmers, such as the new minimum support prices announced in the union budget, are more likely to benefit farmers who own their land than those who work for wages.

Why Jesus cannot save the converts

Author मुखरनीना 0 2309
Courtesy: https://twitter.com/bharadwajagain/status/1574254649536049152?s=48&t=JlEG6Pl-Dssb8gpSKupN-g It is shocking to note that the Nizam imported Muslims to create population supremacy in the region. A large settlement of Yemeni...
Read More

Who is the real minority?