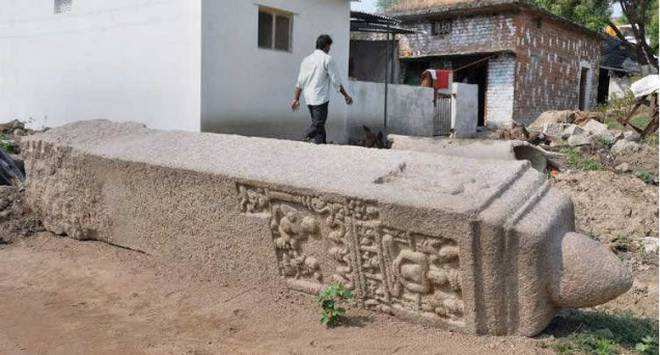 The samadhi of Kannada aadikavi (original poet) Pampa or Pampadu, one among the three poets who translated the epic Mahabharata into Kannada from Sanskrit remains totally neglected with stones strewn all around it at Basavatarakanagar in the town of Bodhan in Nizamabad district.

The samadhi was ‘discovered’ only in the 1970s, thanks to the initiative of a Kandakurthi-based historian, Yadagiri Rao, who deciphered the script believed to be that of an old form of Kannada. After the formation of the Pampa Mahakavi Peetham, half a dozen years ago by some writers and poets, literary activities are being conducted in the name of the peetham.

However, neither the authorities nor literary circles have made efforts to protect the great poet’s samadhi .

Till the recent past, local residents used to wash clothes on these stones strewn around the samadhi with inscriptions pertaining to an unidentified saint (believed to be Pampa) and in a language believed be an old form of Kannada.

Some others offer prayers at the samadhi by lighting lamps. “Pampa was a nomadic saint poet and is believed to have taken sajeeva samadhi (burial while still being alive) at the site in question.

In fact, local people are not aware that he was a poet and therefore offer pooja believing him to be a rushi (saint),” says noted Telugu poet V.P. Chandana Rao.

Little is known about Pampa’s early life and whatever is known was obtained from inscriptions and literature. Born into a Brahmin family which followed the Jain faith somewhere in Karnataka in the 10th century he served as a court poet of the Chalukya King Arikesari.

Author मुखरनीना 0 1464
Courtesy: https://twitter.com/mumukshusavitri/status/1400511902359293954?s=24&t=VYBLUzSysDJMfyItirF3ig The kingdom of Sindh was ruled by its last Hindu king Raja Dahir during the 8th century. When Muhammad-bin-Qasim invaded Sindh, he...
Read More
Miscellaneous

Author मुखरनीना 1 1161
Courtesy: https://twitter.com/infinity_tarun/status/1521329318756073474?s=24&t=TWZlPpaKrf58eUouUetSzg The recent riots in Jodhpur on the eve of Akshay tritiya, the law and order situation, the disruption of a Hindu festival,...
Read More