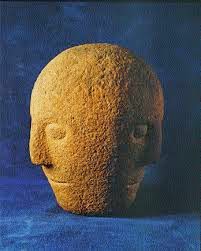 The book of Veles has this riddle:

Translated into English it means:

Because it is a great secret how come Svarog (hevenly and earthly fire) is at the same time Perun (thunder) and Svetovid (Sun).

According to Branibor (now Brandenburg ) chronicles written in 1136 ad, the ruler of the area, Prince Pribislav destroyed a statue of Triglav after he was baptized. This statue of Triglav has previously been highly respected. No detailed description of the statue survived, and there is no description of rituals related to the veneration of this Statue. The only information that the chronicle gives us is that the God had three heads.

In the biographies of the Bishop Otto fon Bramburg, who converted Western Slavs (Sorbs) in the South Baltic, in Pomerania we can find more information about the god Triglav (Dabog, Hromi Daba). All three biographers ( Ebo , Herbord and an unnamed monk from the monastery of Priflinger ) have witnessed the existence of a three-headed idol in Volyn and Šćećin. Ebo said that the city of Volin is situated on the slopes of three hills, and that it has a temple dedicated to a deity with three heads, which was called God Triglav („…deo Triglavo dicitus, tricapitum habebat…“). According to Ebo, Triglav is the highest Slavic God ( ” summus Deus ” ), the ruler of the three worlds (heaven , earth and the underworld). The statue was made of wood, that it’s three heads were encrusted in silver, and that it’s heads were covered with the “tiara” or some kind of a hat made of gold, which covered the idol’s eyes.

In the town of Stettin were three hills, the central one being dedicated to Triglav, the chief local deity. This idol was of gold and had three heads, while its eyes and lips were covered with a golden veil. The pagan priests declared that Triglav (“Three-Heads”) was tricephalous because he wished to make it known that he ruled over three realms, i. e., heaven, earth, and the underworld; and he covered his face because he would not see the sins of men. The temple of Triglav was built with wonderful skill. On the inner and outer sides of the walls were various embossed figures of men, birds, and animals, so well made that they seemed to live and breathe. Their colour was always fresh and durable, and could be damaged neither by rain nor by snow. According to the custom of the ancestors one tenth of all booty was stored in the treasury of the temple, and there was, moreover, an abundance of gold and silver vessels used by the chieftains on festive occasions, as well as daggers, knives, and other rare, costly, and beautiful objects. In honour of and in homage to the gods colossal horns of wild bulls, gilded and adorned with precious stones, were kept there, some serving for drinking vessels, and some for musical instruments.

Otto von Bamberg destroyed the idols, by chopping the heads off with an axe. He then sent the three silver coated heads to the pope Calixto II in Rome, as evidence that his mission of converting Polabian Slavs (Sorbs) was successful.  In Szczecin Bishop Otto fon Bamberg did manage to destroy the temple dedicated to Triglav, but the priests removed the statue of God which was entirely made of gold and managed to hide it in a hollow tree near the city. It is said that the Bishop did not manage to find this statue.

Same authors ( Ebo , Herbord and monk from Priflinger) tell us that the animal dedicated to god Triglav was a black horse , which was used for divination. Triglav was also associated with spear and sword and was considered to be one of Slavic war gods. Some reports say that Triglav had three goats heads.

Among thousands of Serbian folk songs and ceremonial prayer songs collected by ethnologists during 19th century, we find many which talk about Triglav. The description of god Triglav from Serbian folk tradition corresponds closely to references to Triglav which we find in the Book of Veles. They both identify Triglav as main deity and the oldest deity that there is.

We are praying to and we are bowing in front the first Triglav and we are singing great praises to him…This is the essence of Triglav, because all there is comes from him and all to him returns…

The following excerpts are from the book called “Pesme i obicaji ukupnog naroda srpskog” meaning Songs and Customs of all Serbian people. This is a collection of ceremonial songs collected throughout the Balkans in the 19th century by ethnographer M.S.Milojevic. Serbian folk tradition tells us that Triglav is the ruler of all space and all time. He is the god of three worlds: the sky , the earth and the underworld.

This next song tells us that Triglav is also the god of the past the present and future.

Serbian folk tradition tells us that Triglav is the holy trinity. This means that for Serbs, Triglav is “the holy god, father, son and holy spirit”.

This next song, talks about the passing of the flower wreath, from St George (Yarilo, 6th of May, young sun, beginning of summer), to St John (21 of Jun, the summer solstice, middle of summer), to St peter (July), to Triglav (2nd of August, end of summer). The flower wreath represents the sun during spring and summer months. Triglav here is actually St Elijah. His feast day (2nd of August) falls at the end of Summer when sun’s heat is at its maximum. St Elijah is known i Serbia as Sveti Ilija (Sveti can mean saint but also shining) the thunderer, which shows that in Serbian tradition the Sun is associated with the thunde. St Elijah is actually Svetli Ilios, Shining Thundering Sun, Perun and his day is 2nd of August, Crom dubh – Lugh day, Perun day.

Educational Heritage of Ancient India -- A Talk by Sahana Singh

Acharya Jagdish Chandra Bose, one of the Great Indian Scientists, Who Came up with the Concept of Radio much before Marconi did

Contribution Of Hindu Scriptures To Archaeoastronomy

[Q/A] Tracing The Timeline Of Ancient Bharat: Mahabharat War To Guptas — A Talk By Mrugendra Vinodh