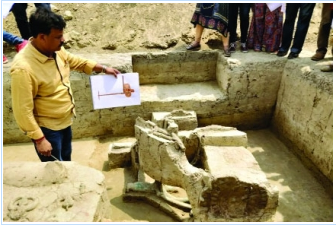 Some 60 km drive from Delhi, at Sanauli in Uttar Pradesh’s Baghpat, the Archaeological Survey of India (ASI) has stumbled upon “royal burials” with remains of chariots dating 2000BC-1800BC.

The first-of-its-kind findings in the Indian sub-continent dating back to the Bronze Age suggest that people of that era belonged to the warrior class and were living a highly sophisticated lifestyle.

Archaeologists involved in the excavation that started three months ago are excited about the findings. They said the recovery is set to give new dimension to our history and date of the Mahabharata period, and further into the origins of chariots and horses in the Harappan age.

SK Manjul, director of Institute of Archaeology under the ASI, and co-director Arvin Manjul, who led a team in excavating the site, said, “The new findings will shed light on India’s place in the ancient world history. Previously, chariots were found to be a part of Mesopotamia, Georgia, Greek civilisations. But, the Sanauli recovery shows we were on par with them.”

He said that though in the past, burial pits were excavated at Rakhigarhi, Kalibangan, and at Lothal, this is the first time that chariots have been discovered alongside the burial pits.  “This is also for the first time in the Indian sub-continent that we got royal burial pits,” he added.

“It is confirmed that they were a warrior class. The swords have copper-covered hilts and a medial ridge making it strong enough for warfare. We have also found shields, a torch and daggers,” said Manjul, adding at least three burial pits have highly decorative coffin covers bearing floral designs and anthropological figures like horned and peepal leafed crown.

Some of the graves contained full skeletal remains while others have a few human bones along with pots (secondary burials); in yet others, only pots were found (symbolic burials that suggest that the person died elsewhere, and was symbolically brought here).

On being asked whether bull or horse was used in chariots, Manjul said, “This is debatable, it could be a bull or a horse, but having said that the preliminary understanding points to the horse. The chariot is a lookalike of the ones found in its contemporary cultures like Mesopotamia. It is a solid wheel with no spokes. In one of the pits, crown or helmet worn by the rider of the chariot has been recovered.

Remains Of A Bathroom Complex, Lothal (A Sarasvati-Sindhu Civilization Site)

Great Libraries Of Ancient India – Proud Legacy Of Our Ancient Past