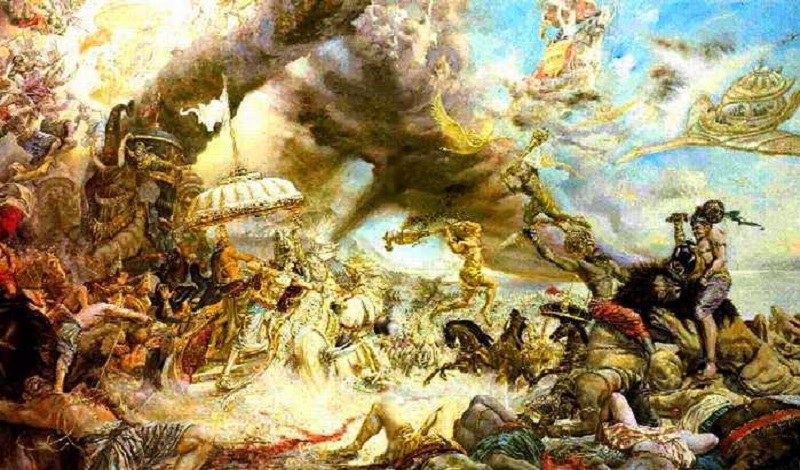 When they broke away from each other around 6000 years ago, the names of their gods mutated- becoming almost unrecognizable pic.twitter.com/tdiOheRGqO

But ONE of them preserved the original vocabulary, names of gods etc with little or late borrowing from other cultures. All other branches show heavy inflow of loan words from languages like Uralic, Semitic, Old European etc

This branch also has the OLDEST literature of them all

That branch is Vedic. And the above fact shows that it has migrated the LEAST from the original homeland. The more you migrate, the more influences you absorb from outside.

Only with the help of Vedic could colonial linguists compare the highly mutated gods of other branches.

For example, the Norse gods Vanir are related to Greek Hermes & Pan. But you can't connect them, unless you individually compare them to Vedic Saramā & Paṇi, explained in Rigveda in X.108 & Jaiminīya Brāhmaṇa (II.440-442)

Norse & Greek, by themselves, are impossible to connect

The linguists cooking up AIT knew this crucial fact very well. They couldn't explain it, so they simply swept it under the carpet. One of them(McDonel) admitted this-

"Vedic gods are closer to the physical phenomena they represent, than the gods of any other IE mythology" pic.twitter.com/Rgff6OUPGb

Enough of that! Let us start with the basics.

What generic words did they use for 'God' in most ancient times?
Ans- 'Asura, Deva & Bhaga' – (In their Vedic forms at least)

How do we know that?
Because all the branches preserve at least one of these forms.

1. Deva
This most common(though not the oldest) Vedic term is found preserved in the following branches-

And the modern English 'deity', 'divine' etc by derivation pic.twitter.com/kTlTAoX55x

2. Asura- Most Indians would give it a -ve connotation. But in Early & pre Rig Vedic times, it was another word for 'God'

Statistically- Asura is used in a positive sense 59 times in the Rig Veda & only 12 times in a negative sense- that too only in late verses(Shendge 1947:49)

3. Bhaga- A Vedic deity of good fortune & fertility, also an Aditya. The RV does not use it as a word for 'God'. But modern Indians, ironically, use 'Bhagavan'.

What about the word 'God' itself?

It comes from Gothic gup & old high Gothic 'got'. They derive from proto-Germanic '*ghu-to-m' which is cognate with Vedic 'húta-m' – 'That which is invoked' or 'huta-m'- 'That which is sacrificed' (Buck 1949: A dictionary of selected synonyms)

Mughal Successor Apologizes For Demolishing Ayodhya Temple (In 1528) By Ancestors

Names Of Bows Used By The Warriors In Mahabharata

Educational Heritage of Ancient India — A Talk by Sahana Singh