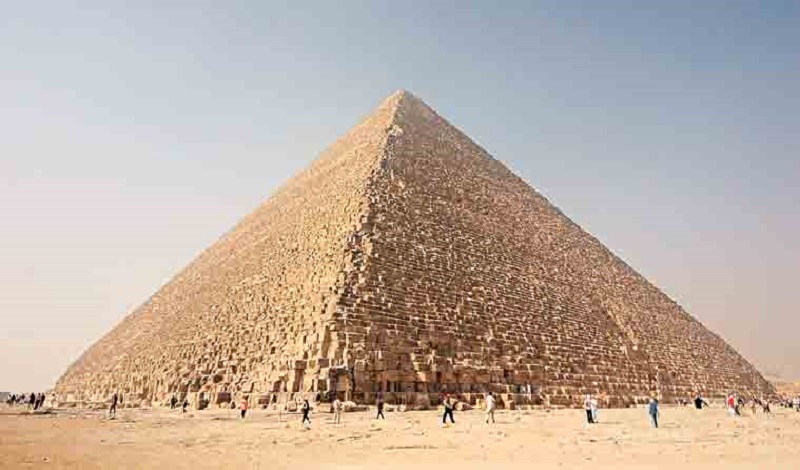 The Great Pyramid of Giza is remarkable not only as an architectural marvel. The four sides of its square base are in almost perfect alignment with the cardinal directions, just a fraction of a degree off, counter-clockwise, from the true geographic north, south, east and west.

Two other monuments, the neighbouring Pyramid of Khafre and the Red Pyramid at Dahshur, follow a near-identical alignment, with each one a different fraction of a degree counter-clockwise from the cardinal directions. When the ancient Egyptians built the Great Pyramid four-and-a half millennia ago, they had no access to modern equipment such as a magnetic compass – which would have pointed towards the magnetic north, with a declination from true north. So how did the Egyptians manage such accuracy?

Then, there is also the theory with an Indian connection. The ‘Indian circle’ method is a long-established surveyor’s tool for determining east and west. Although its earliest known description is in the Vedic text, Katyayana Sulba-sutra, written in 400-300 BC, the method is believed to have been in use in the east-west alignment of Harappan structures as far back as the second millennium BC, possibly even earlier elsewhere. One theory suggests that the ancient Egyptians followed a similar method to determine east and west when they built the pyramids.

Now, a researcher has proposed a variant — with no strings attached. The method Katyayana describes includes a string tied to a rod. Glen Dash, an American engineer who runs a charitable foundation for archaeology, has done away with the string in a method he describes in The Journal of Ancient Egyptian Architecture.

How did the Aryabhatiya and its Algebra, Trigonometry and Astronomy enter the Arab and Western World?

How do we know that the Portuguese/Jesuit missionaries were amassing manuscripts from Kerala?

The Story Of Ancient India: From The Deep South To North – Pan India Unity – A Talk By Raj Vedam

Contribution Of Hindu Scriptures To Archaeoastronomy