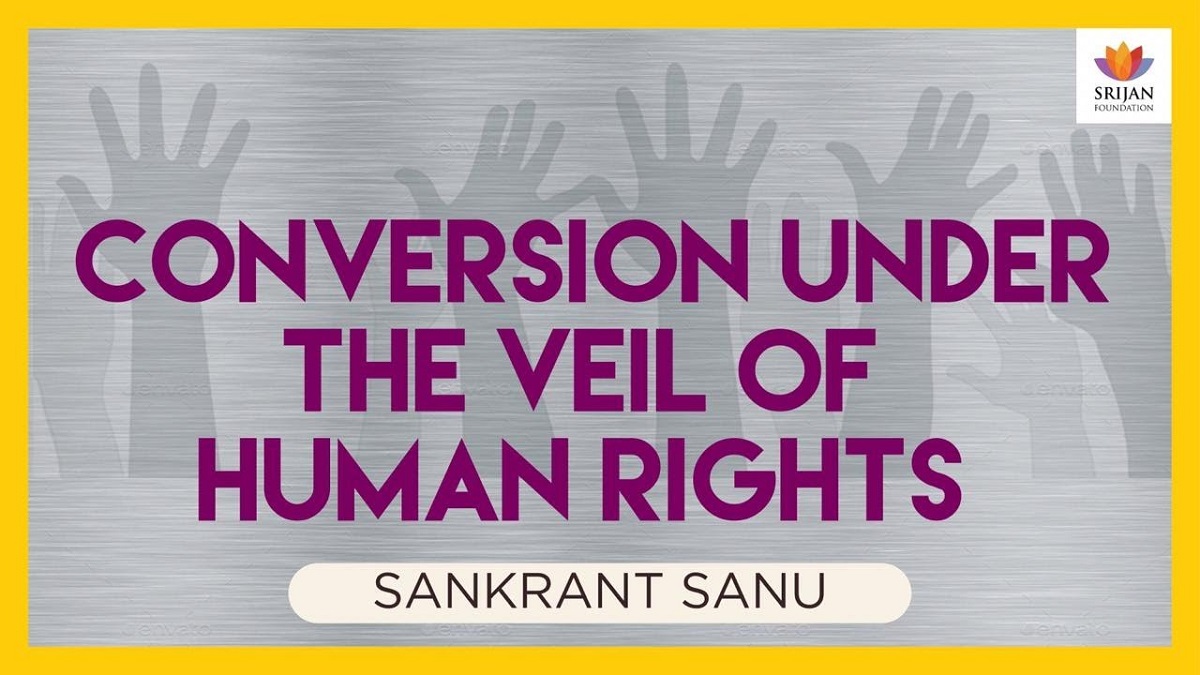 That is not just figurative thing. It actually has enforced. For instance, when Sri Lanka was trying to pass a legislation to restrict missionary activity, the US Secretary of State contacts the Sri Lankan ambassador and saying this is we consider this violation of freedom of religion and trade is going to be affected if you do this, right? So, there is a huge power structure which is backing it. It is not just happening in because once missionaries coming with, missionary as media narratives has got resources, got billions of dollars behind it and it has state power which is backing it. In fact, the entire is so called United States commission for international religious freedom USCIRF creates all these country reports. But the main aim is to continue unhindered access to the missionaries in the different countries.

Now, there is this other thing called project Thessalonica. How many people know about projects Thessalonica? Ok, only very few. So, go just do a Google search, one of the topics as well as an article. I wrote for Indiafacts on project Thessalonica. So, what project Thessalonica? So the project Joshua is overt effort. So, that is very public. Anybody can go look at the Joshua project. Project Thessalonica is a covert effort. So, project Thessalonica is saying that there are, we need to have strategic intervention as a war tactic. If you convert certain people, then our mission will succeed better. So, this is a quote from there. So, it aims to stop or limit Hindu activity by converting people who form the pillars of Hindu culture, also to stop Hindu festivals from happening and different traditions and activities and this comes from the Greece city of Thessaloniki. When Christianity was being imposed on Greece, the Olympic Games is to happen at that time, the ancient Olympics and in the ancient Olympics, they paid respect to the Greek gods, the Greek deities and this was considered to be a threat to Christianity. So, at that time all of this was banned and all of that was wiped out, the Games are also stopped at that time.

And because the popular Festival created faith and created connection from the coordinate people. Even when there was a game happening that was a problem for the church. So, all the attack on festival traditions comes from Project Thessalonica and what they’re saying is specific churches are funding for instance. The Baptist Church in Nashville adopted towns where the annual Kumbh Mela takes place, has been converting locals and visitors face extreme hardship during their next visit. Another mission group is adopting boat men of Kashi. Well so that the Boatman are being trained in other fields. So, they abandoned their profession rights, is very strategically they’re looking at what are the rituals that are followed, how can we attack and just make an intervention, so that some of the roots are cut off and so those activities will not be able to be happening. Right and then what they’re saying is… they’re saying, use different tactics. So in some cases the Environmental Group will protest.

If you start to trace the funding of the Environmental Group, you will see it is all coming from this Nexus. But the Environmental Group will protest against Ganesh Chaturthi, I will protest against Sri Sri doing this event in Delhi. So, all of these are looking as if something happens. This is what going to create a relationship of the people to this thing. And so, we need to figure out how to attack it. Then, somewhere Animal Rights group will be activated. So Jellikkettu to becomes an animal rights issue, somewhere women’s rights groups is activated.

So, this is all very systematic and because of the way the whole PIL system has been setup where FCRA NGOs anybody with no skin in the game can arbitrary file a PIL saying something is happening in the Tamil Nadu. And the Supreme Court will also nicely oblige. It’s so, all of these things making environmental groups are raised and this again, this is why writing this for 20 years. So, it’s not something happened to all of the things that we see happening our efforts that have been going on for 20 plus years. We’re just seeing… we just say, ‘oh, we get upset because something has happened, in other thing is happened’. There like being completely reactive because we think it’s all a local issue and some Hindus will also argue. No, no, no Jellikkettu is very cruel to animals something or some other person will argue. So, all this debate will take place as if this is actually a debate on the issue, but it’s not a debate on the issue at all. The main aim is these are popular traditions and if you kill the popular tradition, even this Sabarimala. What is that in the temple after the restrictions were lifted, the law the faith of the local people dilutes. So, less people start coming, same thing, in the Sabarimala thing, the collections have gone down so much.

Saraswati and Ports in Gujarat