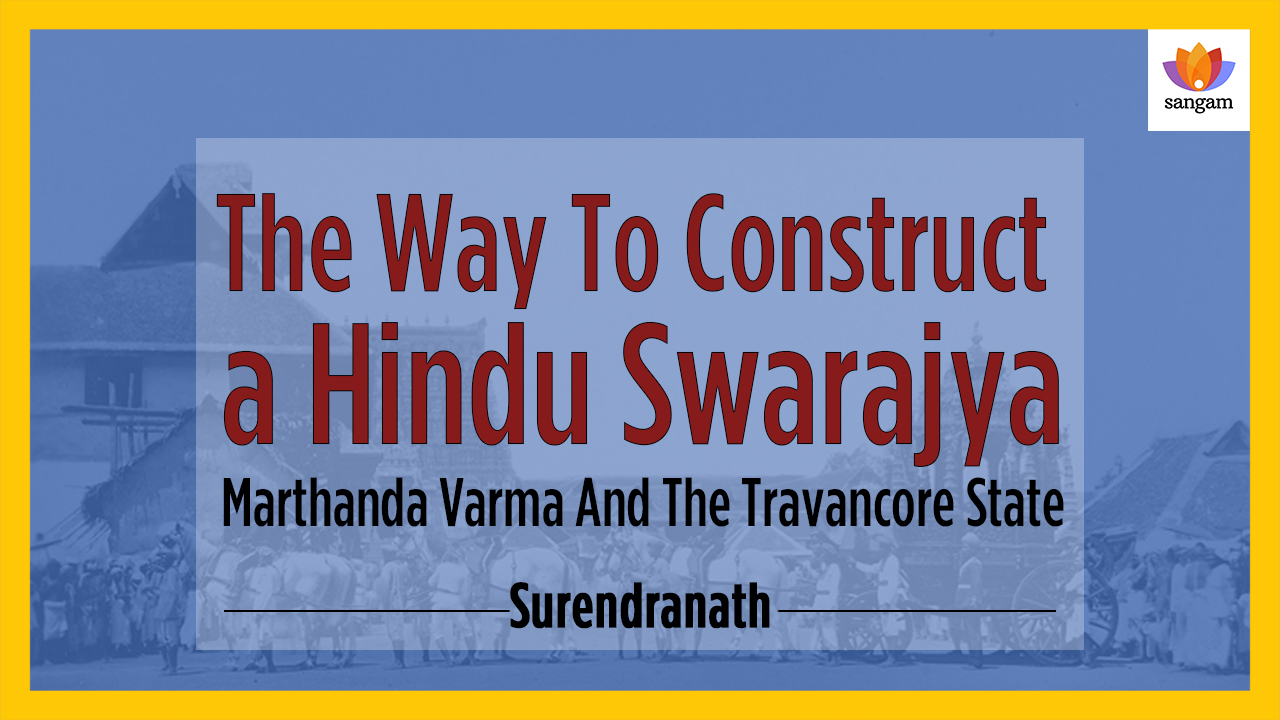 Hindu Swarajya, it would probably look similar to a Japanese kind of expansionist world, post-world war two Japanese expansions. In terms of the state itself I have thought about this and people discussed this again. This is just my personal thought. And, we have thought in terms of a constitutional monarchy and the experience of constitutional, semi-constitutional monarchies in recent times in India. You cannot get a similar expansion, but similar, directly similar experience in India, but I would like to draw parallels between the experience of Travancore as a state versus Japan as a state.

Travancore, before Marthanda Varma, the Travancore region was ruled by, was full of small principalities, feudal in nature and most of whom were, traditional aristocrat, dynastic aristocrats, the Rajas and the various Nairs and so on. And before Marthanda Varma, there was no real ruler at Tranvacore or near titular head. But after Marthanda Varma, it was similar to the Meiji Restoration, in terms of the traditional feudal dynasties see their importance diminished drastically, especially the Ettuveetil Pillamar, the dynasty, the eighth feudal chieftains, Pillamar, chieftains, whose influence was drastically diminished in terms of, in favour of, a centralized powerful monarchy.

And, what has our experience been with this monarchy. It was always a progressive region as compared to the rest of the country and some of the very important social changes which came about in India. I will just take one very important social change which is the temple entry, which is where we constitutionally, we are bound to give access to the temple, to people from all parts of the society, without restrictions. The very first proclamation in India was made by the Travancore State, the Temple Entry Proclamation in Travancore state and almost every state, every, before and after independence, whether it is Mysore or the later presidencies – Madras, Calcutta and Bombay presidencies which adopted it, adopted some aspect of the progressive Temple Entry Proclamation from Travancore.

If you look at Dr. Ambedkar’s experience, own experience, the people, it was not British or any, the traditional British Raj which supported him in his endeavours. It was Sahuji Maharaj of Satara and later on the Gaikwad king of Baroda who supported him, and who helped him out when he needed certain financial help. So, in terms of progressive behaviour, the behaviour of the states, traditional princely states, some of the traditional princely states in terms of universal education, Travancore was the one of the earlier states to make primary education universal and accessible to all parts of society. And, if you look at the noon meal scheme, the early precursor of the noon meal scheme was in Travancore state under Raja Chithira Thirunal and you should not, of course under Sir CP Ramaswami Iyer, who as the Diwan and the Raja Chithira Thirunal, the noon meal scheme was one of the earlier thing, early schemes which was carried out, and later on it was just adopted then by the Kamaraj government. And, now it is a pretty much a standard thing which happens across every Indian state and this has been a game changer in terms of improving literacy levels, in terms of improving nutrition, in terms of improving overall quality life of the Indian public.