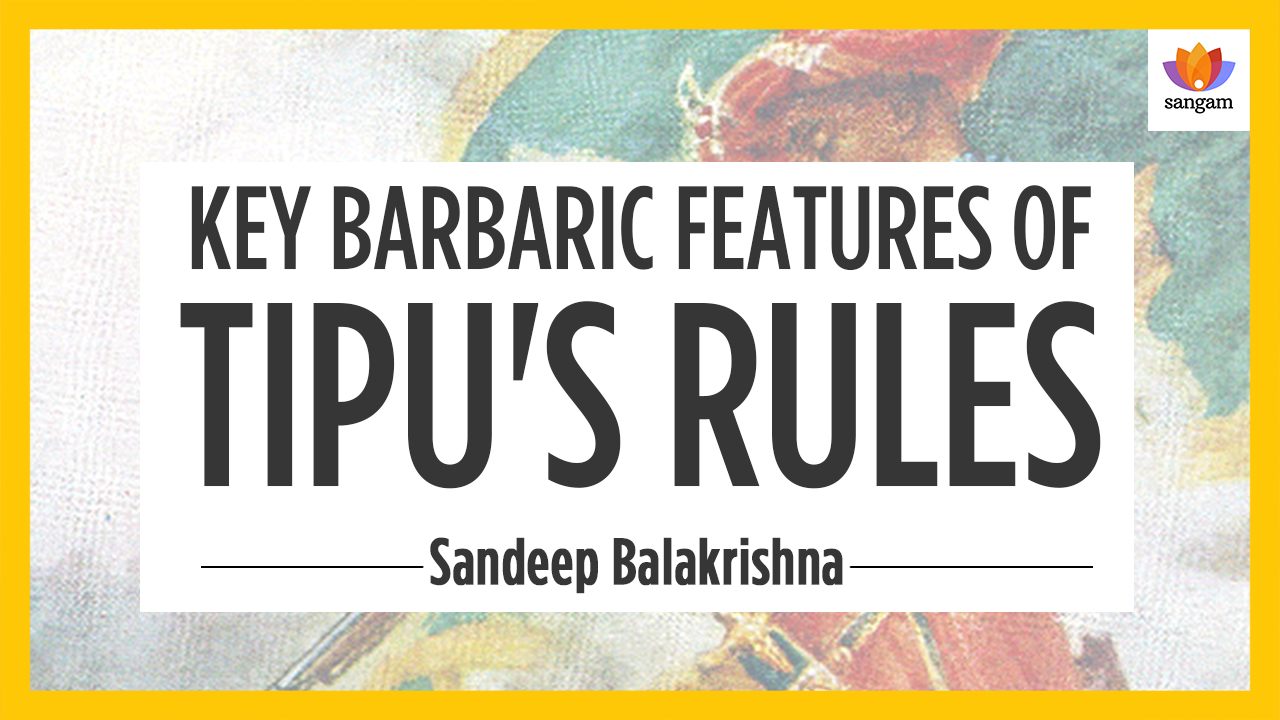 So I will list out a few key features of Tipu’s rule.  It was a regime of military and economic terror. It was characterized by unnecessary destructive raids throughout South India. Most notably, in Malabar and Coorg. And it was also notable for the sheer scale of rural destruction. Entire villages found in the countryside were completely burnt. For example, Kushalnagar, Tallakaveri, Mudikeri, Napoklu. So when you travel to Coorg from Mysore, you get all these major towns and villages, completely burnt to the ground. And Calicut (or Kozhikode) was burnt to the ground as I just told you. This Calicut was a hub of spice trade for several centuries and Tipu’s just one destructive raid, changed its character forever. And spice trade there came to a permanent halt for nearly 40-50 years. And all these places were entirely depopulated, and there was no human habitation after he invaded. Those few of them who survived, the weak and old, all these people, women, they were forcibly converted or killed brutally.

So another key feature of Tipu’s rule was the large scale destruction of Hindu Temples. If you look at the Malabar Manual, it gives you the detailed list of all such temples. I have listed only about 56 in my book, just the major ones that were destroyed. So Lewis writes in the Mysore Gazetteer and I quote, “In a vast empire of Tipu Sultan, on the eve of his death, there were only 2 Hindu temples having daily functional pujas. Only two. Tipu also Islamized every facet of his administration by A) Giving Muslim names to original Hindu cities and towns. Sakleshpur was called Manjarabad and thankfully it was changed back.

So he changed the units of measurement of weights, distance and time, so that it corresponded to some aspect of Prophet Muhammad’s life. He founded a new calendar, and he named each year after a synonym given to Muhammad. And he changed the official administrative language of the Mysore kingdom from Kannada to Farsi. So that Farsi was not real Farsi, and I will come to that in a bit.

Other key features is the complete devastation of Mysore state’s economy through reckless and expensive unprovoked military campaigns. He appointed incompetent officers to key posts, and the only qualification to occupy these bureaucratic posts, was that you had to be a Muslim and bonus, if you were a Hindu who converted, you got a fast track promotion.

Genocide of Hindus : The Biggest Holocaust in World History!

Nalanda according to Chinese Students

Did You Know Evangelism and Defence of Hindus Talk Snippets Apr 13, 2018

Policies adopted by the Portuguese colonialists to convert Hindus to Christianity

The Untold Story Of Taj Mahal